After the Hurricane, Oysters, Kindness, and Survival

Apalachicola is a town that remembers its ghosts and welcomes them. This town on Florida’s panhandle, is a town of oysters and celebrations, proud of its history. It’s a town where the locals have pamphlets at the cemetery explaining who is reposed in more than 40 graves.

In this town of roughly 2,500 people, the friendliness is obvious in every interaction. Even one month after Hurricane Michael ripped through it and devastated neighboring communities, Apalachicola seems – wet, but lovely.

This town on the bay, the second oldest European settlement in Florida, is usually full of tourists spending money in the small restaurants and art galleries, going on fishing trips, filling up the rooms in hotels, inns and weekly rentals, but not this year. Even the man who comes from Maine to sell his blueberries every November is a no show.

Dan, one of the owners of Hole in the Wall Seafood, tells us this with a shake of his head. “I don’t know what happened to him. He just hasn’t shown.” 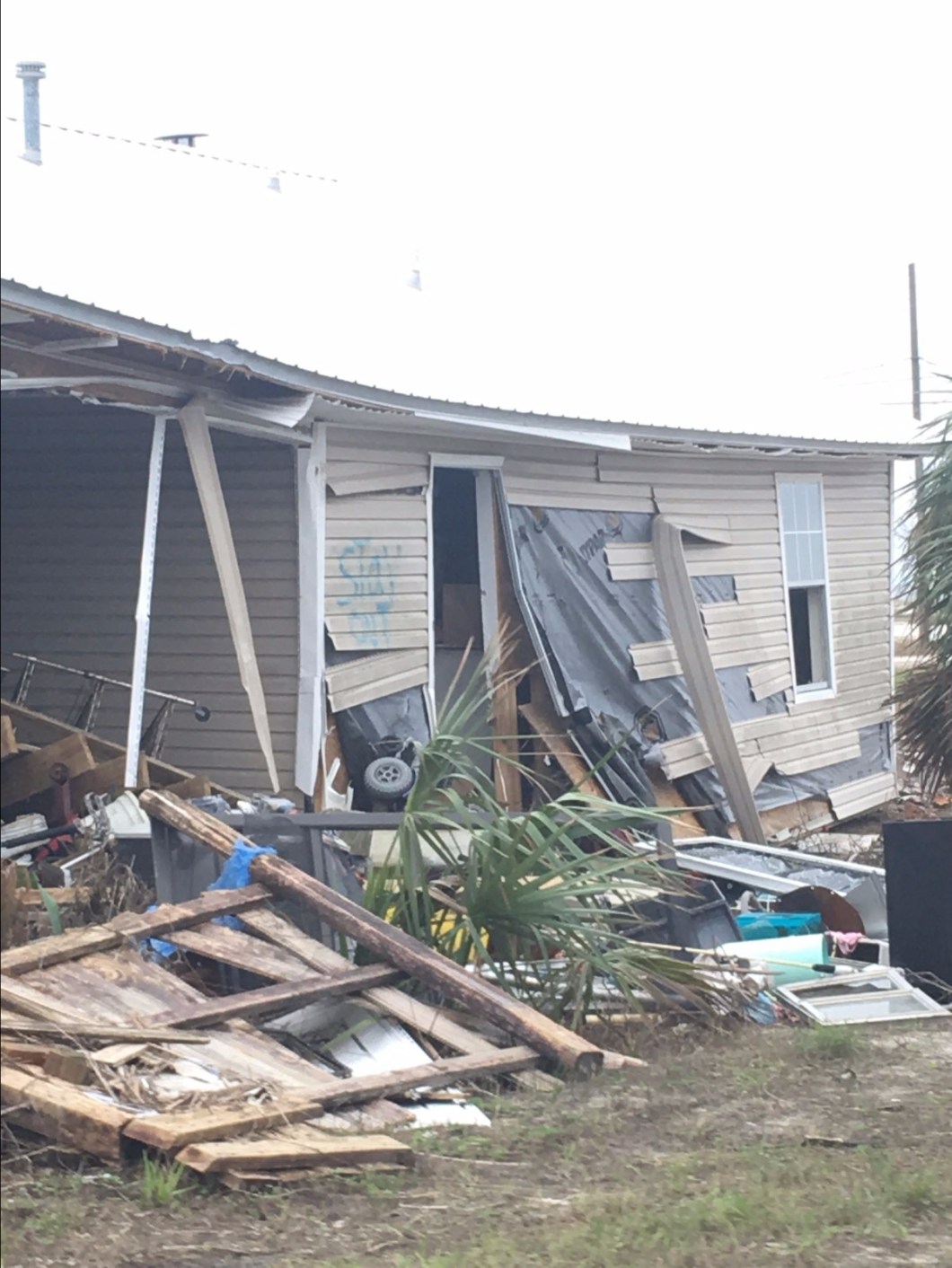 A lot of visitors haven’t shown. Maybe they are afraid of what they’ll see, Dan wonders. Some buildings look permanently shut down. Floors are buckled. Windows are holes. Squeegees and bleach can’t fix everything, but sometimes you can still get a whiff of the bleach, which is better than the stench of mold, which emanates from some of the buildings closer to the water. The storm surge was about 9.5 feet here. That’s a lot of water that sloshed through the two lower streets that run parallel to the water.

The workers at the Hole in the Wall Seafood catalogue their friends’ losses to the group of diners that come in and sit at a high table. Normally, this time of year you can’t find a spot to sit in this cozy, friendly restaurant that features oysters (of course) and cajun grouper. But nothing is normal and it’s evident by their conversation. One friend has lost a porch. Another lost their oyster building. Another lost half their roof. Someone lost a car to a tree. Someone and someone else and someone else lost their house.

“You were in Spain for the storm?” Dan asks from his station behind the bar as a woman arrives, joining her friends at that back table.

“She just got the evacuation notice and kept on goin’. All the way to Spain,” they tease and there’s laughter all around until someone else adds, “Was a good idea.”

A month later and the words and people are still brave, but the emotion is still raw.

Apalachicola has been Florida’s oyster capitol for a long while, but the BP Deepwater Horizon spill in 2010 created a disaster for the oyster industry and its workers. A bay becoming increasingly salty has also allowed sea predators to suck out the oysters and leave just empty shells. It’s a double-whammy that has slammed the industry and its people.

The reason for the bay’s saltiness has even created a legal battle between Florida and Georgia with Florida claiming that Georgia is hogging up the water. Florida receives less fresh water and the bay becomes more and more salty. This allows sea predators like oyster drills to hang out in the estuary and eat the oysters, plundering at will in the increased salinity.

Apalachicola oysters used to be 90% of Florida’s wild supply and 10% of the United States’. That  isn’t true anymore. Farm-raised oysters have taken over the industry.

The grandfathers and fathers of Apalachicola’s modern-day oystermen used to use tongs to lick up 50 or so oysters a pop. Now it takes 50 tong licks to get just a couple oysters. Instead, oyster men are trying to rebuild the oyster beds that were devastated after the oil spill and now after the hurricane.

“I don’t know what will happen,” one man announced at the bar, laughing in that bitter way that happens. “Maybe we’ll all go to Maine and lobster.”

“Freeze your balls off,” a waitress announced.

“Yeah. Forget that.” He laughed and took a swig of his beer. 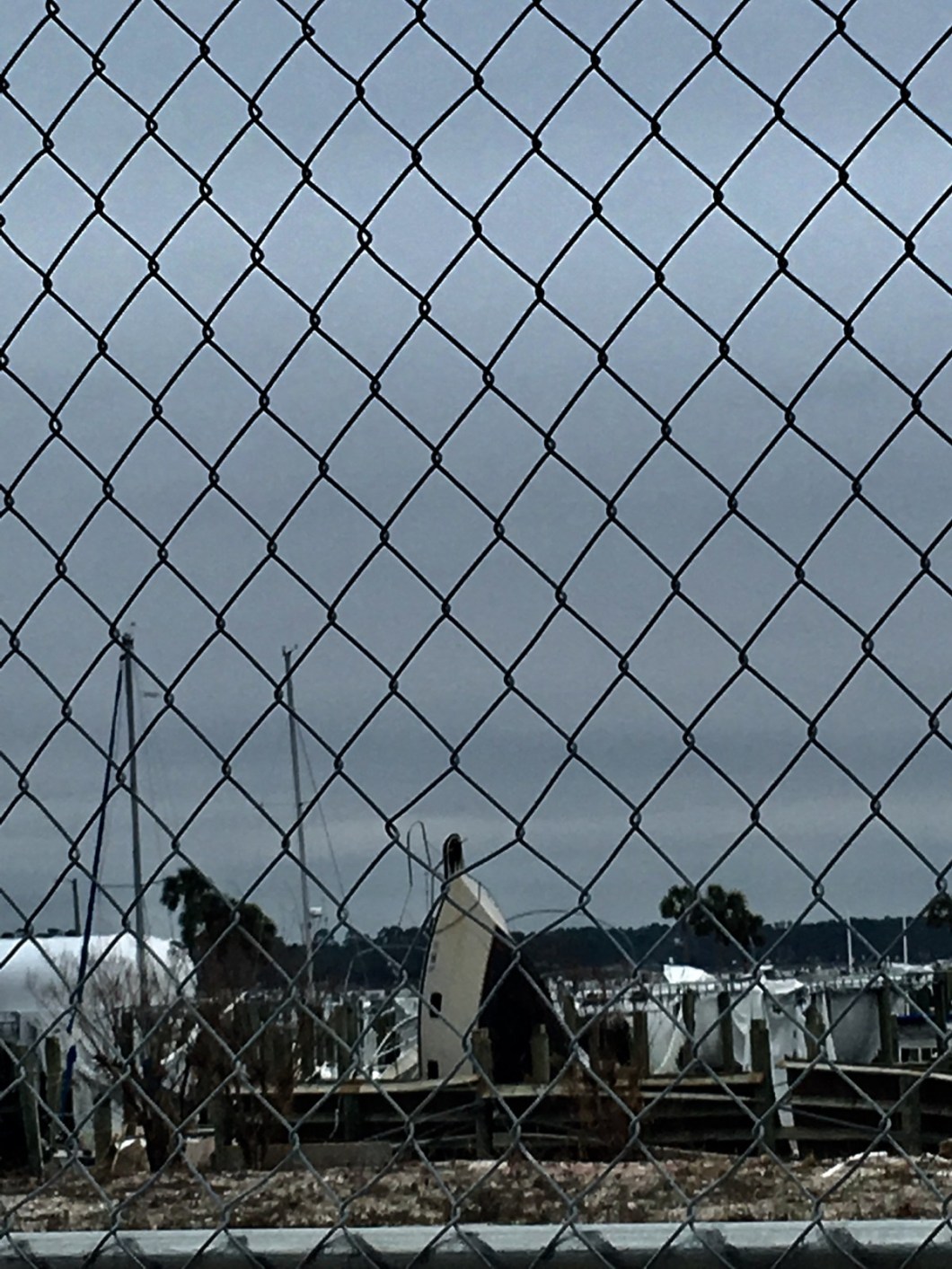 And then came Michael.

They’ve had hurricanes before. There are tall stakes in the ground to estimate storm surge by hurricane category. One is right by the playground. Another waits closer to the center of town. Warnings. Memories. Ghosts of hurricanes past measured in feet and fears of hurricanes yet to come.

“Waves were breaking in my front yard,” the man at the Hole in the Wall tells us. “It came in around 2:30. I had five or six people with me on the patio. The roof sheet metal? It just started peeling off. That’s some sharp stuff. I hustled everyone in. I think my patio’s down by the raw bar now.”

He faired better than his neighbors, only losing a patio and bins full of clothes and other items. He jokes that a seaweed berm probably saved his house, shakes his head about his luck, the randomness of hurricane winds and waves.

The rest of the customers and staff go back to cataloguing their losses, their neighbors’ losses, a seemingly never-ending litany of damage. Floods took the 13-Mile processing plant, which lost its roof because the walls blew off. The two downtown streets, Commerce and Water, flooded.  The neighboring town of Port Saint Joe was hit even harder than Apalachicola. But the McDonald’s there is open again even though the building was flooded out, windows are still being repaired and the toilets are in a trailer in the parking lot. Driving through the town, you see holes that shoot all the way through a house, houses moved 50 feet of their sites, sailboats jetting up towards the sky, the bottom submersed. You see mounds of debris on both sides of the roads, moldy sheet rock pulled from houses, broken trees, couches, mattresses, waiting to be disposed of.

Just driving down a street makes you a witness to destruction.

The loss of homes, of personal items, is horrific. But there’s also a loss of revenue. The Hole in the Wall estimates that it lost $30,000 in revenue for the two weeks it was closed. The second two weeks, the owners made about a quarter of what they usually make because the people just aren’t here.

Dan’s wife, our waitress, sighs and tells everyone that they could have opened sooner, but it didn’t feel right. They were busy feeding volunteers. From the Thursday after the storm through the Sunday, restaurantauers, volunteers, teachers, banned together to feed everyone, serving thousands of meals while waiting for electricity to come back to the town.

So, they helped the feed the town instead, for free. 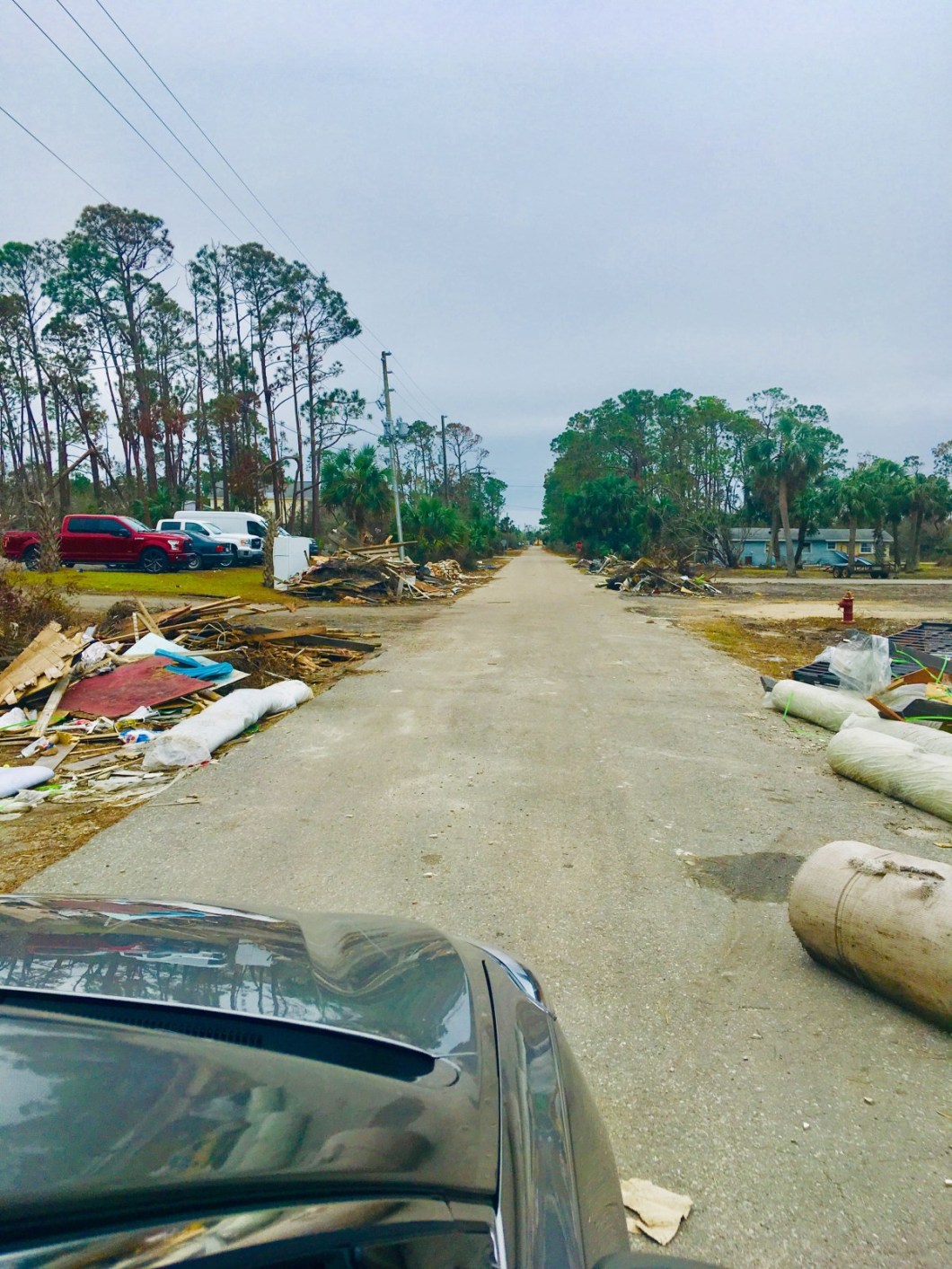 Apalachicola seems like a town that reinvents itself to survive. Before it was Apalachicola, it was a British trading post, Cottonton. Before it was Cottonton it was a settlement of a subgroup of the Seminoles. The name Apalchicola is a combination of Hitchiti words, apalahchi and okli.

During the Civil War, the USS Sagamore captured the town, occupying it for most of the fighting.

Before the railroad was popular, Apalachicola was the third biggest seaport on the Gulf. But then railroads came. So that changed. Thanks to Greek immigrants, the sponge trade was a major economic driver. But then that changed, too.

Back in 1837, the town allegedly had 600 meters of one brick store after another on the main street, a testament to its prosperity and health. Most of those buildings were three stories high and 25 meters deep. Granite pillars adorned every one of them. It doesn’t look like that now, time and industry, hurricanes and people, have changed the landscape and the economy over and over again.

Before the oysters, it was lumber.  It was sponges. It was a port city full of trade. What will it be next? That’s really the question.

And it’s a question for a lot of us and our towns, our cities. What do we become when our main industry dies? How do we reinvent ourselves, support our families and way of life when fisheries die off, when paper is no longer made, when Amazon goes under, or when climates change, when war comes? The act of reinvention, of survival, seems primary and so essential, but we never really focus enough on it, not in our daily lives, and not for our communities.

Apalachicola is impressive, not just because of the kindness of its people, but because of its capacity to change, to survive, to transform. 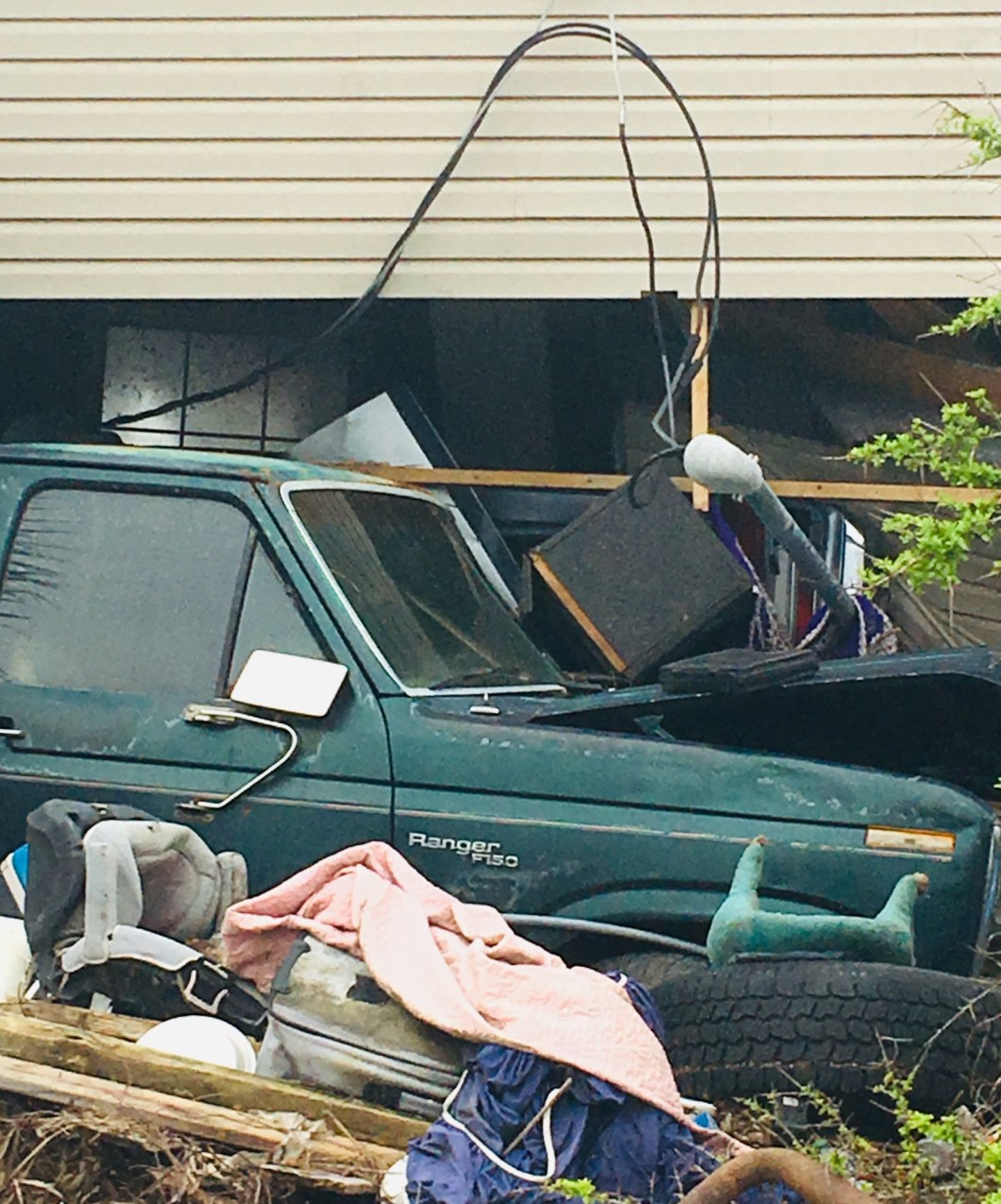